My Father Edward fondly known as Ted Carson was the youngest of 5 children born in Hobart Tasmania in 1927.
Dad always had what he called his “wonky shoulder” having no idea of what was actually wrong with him, never having spoken about this with his doctor; he just got on and worked hard at everything that he did, compensating or being inventive to do what he needed to do as his muscles began to let him down.
It was not until my son Ben, at the age of 15 started having problems (he did karate at an elite level, and thought that he had an injury) and was placed under the care of a sports physiotherapist, who suspected that there was more to this supposed injury than met the eye and referred him to a Sports Physician; after some testing the devastating diagnosis of FSHD was found.

Of course this opened up a huge can of worms and also shed light on problems other members of the family had or were encountering.
From my father’s direct family, it would appear that at least two and possibly three siblings were affected by FSHD to varying degrees, two girls and Dad; one girl (Cecelia) severely disabled, although she did live into her sixties, was affected from her mid-teens. Cecelia lost the ability to walk unaided when she was quite young but as she never went to a doctor until she was in her late 50s, noone knew what was wrong with her and even when she entered an aged care facility there was still no definitive diagnosis of her condition.

I have three children a girl and two boys. My daughter is free of the disease but both my sons are affected. My elder son, Rodney, much like me with very minimal symptoms where as my youngest son, Ben who is now 34 has been showing symptoms since his early teens. Although Dad lived to 87, the last 10-15 years were very difficult for him and the end of his life found him totally incapacitated.

It is my hope that some treatment will become available for my sister and son before they find themselves in the same situation as my Dad. Thanks to the fantastic research that is being conducted into FSHD and the resultant genetic testing that is now available, part of our family story with FSHD does have a happy ending.

When Rodney (my eldest son) and his wife decided to start their family, little or no thought was given to FSHD and the impact it may have had on their children. It was only when fertility issues arose and IVF became necessary for them to conceive a child that the option of Genetic Screening was raised. They were living in New Zealand at the time but travelled to Sydney IVF and started a journey that has been long, with a high cost not just financially but emotionally as well.
The result has been two beautiful daughters Olivia and Madeline) who are both FSHD free. When Ben (5 years younger than Rodney) and his wife Emily wanted to start their family they were very aware after following Rodney and Anita’s journey, and the fact that Emily is a Neonatal Intensive Care Nurse, that genetic selection was the only course for them also. Once again the family followed and supported them on this emotional and financially taxing journey, but the joy of them now having two beautiful sons (Connor 7 and Zack 5) free of FSHD makes it all worthwhile.

They have both donated affected embryos for research, which has eased some of the heartache that they have gone through. It meant so much to Dad to know that finally his family, who he had devoted his life to, was now free of this dreadful disease. It was a burden that weighed heavily on him when he understood that he had passed this disease on to his daughters and thus his grandsons; it has been a heartbreaking journey for us all, but also one to be grateful for. It is wonderful to see Olivia, Madeline, Connor and Zack thriving and I am so grateful to the wonderful science that enabled them to be free of FSHD.

I have since recalled that one of my cousins has FSHD therefore his mother, would have had been affect, confirming that 3 of the Dad’s siblings were affected.
They emigrated from the UK in the 1920s and on a visit to England in 1974 Dad met his cousin and to their surprise they both had this unexplained complaint.
It was not until many years later that we found out about FSHD. FSHD is so prevalent within my family and it would be interesting to know how many other families have such prevalence.

I continue to pray for a treatment for my sister and son and all people affected by this disease. 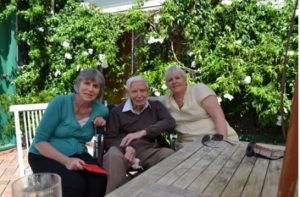