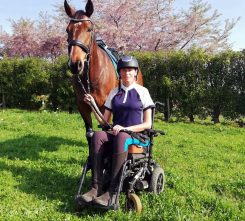 Jodie Thorne is a Web Designer and passionate horse rider. She was diagnosed with FSHD when she was 12 years of age.

Jodie graduated from university in England with a Media Production degree in 2002 and moved to New Zealand two years later to start her kiwi life with her husband Darren. Jodie started a web design and development company called Wicked Eye which allows her to work from home doing something that she loves and enjoys. Jodie has a huge love and passion for horses and is a Grade 1 Para Dressage rider where she trains and competes with her beautiful horse all over New Zealand. She has an amazing team of helpers and sponsors and hopes to one day represent New Zealand in Para Dressage in the future and on the international stage.

Jodie’s FSHD has progressed a lot since she was first diagnosed from the signs of winging scapula, eyes not closing fully to sleep and the inability to wink or whistle, to her now current stage of using a wheelchair.  She believes that her progression would be a lot worse if it wasn’t for her passion of riding. It has been such a fantastic form of exercise and has also given her the opportunity to be competitive at sport on a level playing field, despite her mobility and strength problems.

Jodie says “I’m looking forward to getting involved with FSHD Global and getting more awareness of FSHD out there, as well as raising money and hopes for a cure in the near future. I’ve been waiting for 26 years but it feels like it’s very close now!”