I was born in Parramatta, August 1944. In 1945 we moved to a dairy at the north end of Lake Macquarie which is where I have spent most my life. I started school in 1949 and this was the time I realised that something was different about me and nobody else had the same restrictions when it came to playing in the playground that I had.

With the trees in the playground the boys would spend time climbing and swinging in these trees, when I tried to do this it was a case of not trying again or copping the taunts about my inability to get off the ground. I settled for Red Rover, Crossover. This was a running game where you started with one boy in the middle of the playground and all the others had to run to the other end of the Playground without getting tagged by the fellow in the middle. If he touched you, then you had to help him get more of the others. My favourite game was marbles, I found that I was pretty good at it.
By the time I was 12 years old I started having trouble with pain, my shoulders started first and after convincing my parents that this was a problem they started to take me to doctors, but I never received any help as no doctor could tell me what was wrong.

The difficulties were kept at bay by being cautious about what I was going to do. As a kid you learn very fast what is possible and what is not possible. When I was swimming competitively there came a time when I had to give that away too because I didn’t want to take my shirt off anymore. The weakness had become so pronounced that the pec muscles started to sag, which was not a good look for a male at that stage of life and it is something that never has got any better.
As a teenager I started to play soccer, at which I was only ordinary and eventually had to become the goalkeeper, no running. That only lasted until I was 17 and by this time my sport became swimming and sailing. They both only lasted as long as my body could cope with the demands placed on it. By the time I had finished school I would take myself to any Doctor I hadn’t seen before in the hope that I could learn what was wrong. During all this time of visiting many doctors the problem was getting worse. It wasn’t just my shoulders anymore my legs were also becoming weaker.

When I had finished School I started an apprenticeship in Retail Butchery. This job required a lot heavy lifting and my body increased in size so much that people mistook me for a body builder. My chest measured over 42 inches and I was not yet 19 years old. I was also surprised at how strong I was, but I could not lift anything above my waist. Still no doctor could tell me why I was restricted like this, and by this time I had learnt to adjust my way of doing things to the ways I could cope. At 24 I had met the love of my life, became engaged, and then married in September 1968. We have not long gone past our 51st anniversary.
We spent the first five years traveling as much as we could because once we started having children we would not be able to do that so much. We had two children, the last in April 1975, and during this time my body was slowly getting worse, but still no results from doctors on what the problem was, I was using paracetamol in an attempt to control the pain and without any success.

By the end of 1978 I had decided to change my job. My father had just retired from the Smelting Industry and when I learnt how well
the company he worked for had treated him and the benefits he received from them I decided this was a place I wanted to work at too. I started the next week and I found that the manual labour required was a lot easier than what I had previously done and a lot easier to manage.
During the next nine years I learnt every job in the Smelter and was promoted to a Plant Supervisor. This was a great step in all ways but specially because this job meant that didn’t have to do much manual labour which worked in my favour. My new role was to plan the work for everyone and then make sure the results were achieved.

After two years my body started changing again, my left hip was giving way making it difficult to walk at times and the electric shocks shooting down my legs were becoming unbearable. It was also really hard to keep focus with my eyes because of the savage cramps in my face and around both eyes. Next was my fingers, they go in to what I call lock down where they cramp up and turn sideways.
On one of my working shifts I was having trouble staying on my feet, and at the end of my shift I was doing my last inspection of the plant and while on my way back to my office I fell and this time I could not get back up. A few of the workers saw what happened and came to get me up, by the time I had arrived home I was determined to go to my doctor, again.He decided to send me to a new Neurosurgeon, and he took one look at me and said we are going to organise some tests for you. That day I had blood tests and nerve conductivity tests and at the end he said to me I find it hard to believe that your doctor has not done anything before about sending you for opinions.

When I told him I had been trying to find out what was the matter with me since I was 12 years old he had a hard time believing me. He then told me I had Muscular Dystrophy. A form known as Facioscapulahumeral but the good news was that it was not fatal, and that i should live a normal life span.

I had a vague idea of what that meant, my muscles would lose the ability to work and it was incurable. I asked him if I could have a certificate for the next few days to get paid for my sick days. His reply shattered me, “You won’t be going back to work EVER, your working days are over”. That statement replayed over and over in my head for weeks after. There I was, just turned 49 years of age. I was only just starting to get things put in place to plan my retirements and now this.

After I was diagnosed my Neurosurgeon asked if there was any members of my family that presented with any of my symptoms. I told him that my mother had a bad knee and had just been replaced and that she also had shoulders a bit like mine, as did one of my sisters. He arranged for them to see him and both were diagnosed with FSHD.

The good thing that came out of been diagnosed was that now doctors took me a bit more seriously when I asked for pain relief. It took a long time to find a drug that would control the pain to any degree, and it ended up being Morphine. This was a drug I took under sufferance as it was the only one that provided me any sort of relief.

However, there came a time when I said no more. I was sick of being in a stupefied state and sitting around dribbling down my chest, I needed a change. My GP sent me to a rehab Doctor, a Doctor I had not heard of before and after he heard my story he said that I was to be slowly taken off the Morphine and he would start me on Methadone (trade name Physeptone). This was ten years ago and I am still taking them, but there are side effects. After 8 years of taking this medication my teeth started breaking away from the gums, and eventually they all had to come out. I may have lost my teeth but even so I could not have got through the pain without them.

During the course of treatments I’ve tried lot of things, and I have tried them simply to have a little comfort in my life. Physiotherapy did me more harm than good, over the years I had a few attempts at it and all failed. I tried heated pools for exercise, they were great while I was in the water, but to get out, dried and then get homes it was such an effort that it made me worse than I was before I went. By the time I got home I was so worn out I would sleep for approximately four to six hours. Eventually after six months I had to give up.

Ten years after retiring I was in a powered wheelchair permanently. I could not stand without hanging onto something solid, if I did it was for a short period only. In the years from diagnosis to now I have also been diagnosed with Sleep Apnoea, Narcolepsy, Chronic Peripheral Neuropathy Pain, Obesity and Depression.

All my internal Organs have been pushed upward and to the right by the abdominal muscle constantly pushing on them. That has left me with what looks like a huge mass in my right side. My left arm and shoulder are in constant high level pain as is my lumber region where L3 & L4 are rubbing together and my disc has disintegrated. My body is in a lot of pain but I learnt to deal with it as much as I can.

When I found out I had this disease, I hoped and prayed that neither of my children had been saddled with FSHD. It came to a time where it had to be done and after some testing they both received a clean bill of health. This was a great result and I felt so relieved knowing my children would not have to suffer like I have.

In writing all this I do have a lot of support and this comes from my family and from the people that provide my home care. While I have them, I have all the support I need. 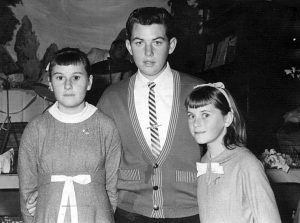