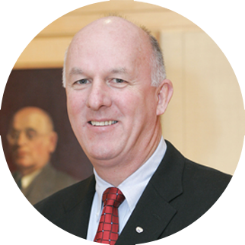 David Mackay is a great supporter of the Foundation and has been actively involved with FSHD. David is currently Director of Fortune Brands Home & Security Inc. (since Oct 2011)n and also sits on the Keurig Green Mountain board (Since 2013). He is a member of the Kalamazoo Institute of Arts (Trustee) (since 2009).

David has extensive Australian and international retail and consumer goods experience. He had a long career with Kellogg in Australia, retiring as Chief Executive Officer and President of Kellogg Company in January 2011 after holding a number of key positions within the company in the United Kingdom and the United States of America. David took on the role of Chairman of McGrath Real Estate in July 2015.