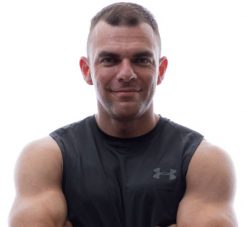 From an Australia junior athletics champion to being a personal trainer of 13 years, Phil Harding has based his entire life around athletics, sports and fitness. While the results of chance have given him the ability to find athletic performance easier than some, it is this same genetic chance that had inflicted several members of Phil’s family with FSHD.

In 2019 Phil decided to finally be tested for FSHD, given his family history, even though he showed no clinical symptoms. It was something that had always been in the back of Phil’s mind. His results were negative.

The contrast between what Phil took for granted and what those around him, whom he loves, are forced to struggle with, is what had drawn him to FSHD Global Research Foundation and to become an Ambassador.

While waiting for his results he decided that he would run the 42km Sydney Marathon to raise money for Muscular Dystrophy. He did this without doing any running training and to challenge himself on what the mind can achieve. The result of this endeavour was that he discovered the world is full of kind people and that running a marathon without training really hurts.