FSHD has robbed Mitchells childhood much quicker than we could have ever expected.

Picture looking back at photo’s of the past, and how they can bring a smile to your face. Looking back at pictures of Mitchell, my husband and I have moments of happiness that are then clouded over with grief, realising how much of his childhood has been taken from him.

He used to run crazily down the hall dressed as Buzz Light Year when he was 2yrs old, ride his bike or scooter when he was 3yrs old, at 4yrs played preschool soccer(with difficulty but gave it a go). At 5 he started school, he was slower than other kids but could still walk short distances, play handball, get on the floor to play with the other kids. At 6 his body no longer allowed him to walk, and confined him to a wheelchair. He could still stand on the spot, however at 7 that wasn’t even possible any longer. He is now eight and asks “why does everything happen to me”.

Besides not walking, his arms are so incredibly weak he can’t even lift his hand to scratch his face. He needs to use one arm to leverage the other to eat and drink. Since 3yrs old he has worn a brace for his foot drop, and last week has been told that he needs one for the other foot. Not happy! Muscle weakness in his face prevents him from smiling. His speech is affected, and will worsen with time. He has no abdominal strength, and used to wonder why his belly was so “fat”, I used to explain his back is curved so it makes his belly stick out.

As Mitchell’s parents it’s hard to hear him say things like “I wish I could walk again. I like it!” or “Hypnotise me so I can stand”. He was watching a BMX stunt show once, at the end the riders invited all the kids to come and have a go and he quietly says to himself “dam you legs” while looking down at them.

Everyday breaks our hearts to see him struggle with daily tasks. To see him becoming more dependant rather than independent.

We don’t know what the future holds for him; his only hope is finding a cure to stop FSHD in its tracks. 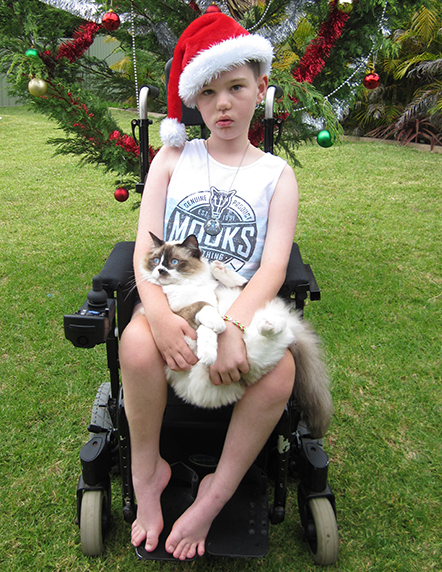