“Something’s wrong with your shoulders, your bones just poked out.”

That was the first comment I received about my FSHD. I was in 6th grade. I was wearing a light blue t-shirt, my hair was tied up into a ponytail, and I was sitting on the floor at a school assembly. The boy sitting behind me who made the comment didn’t say it in a taunting way. He sounded concerned. I didn’t know I had FSHD at the time. I pretended I didn’t hear him.

That was also the last time I wore my hair up in public or wore anything lightly colored unless I absolutely had to. I started to dislike my body. I stopped wearing shorts in public a few years after that.

I was diagnosed with FSHD later that year, at 12 years old. Sometimes, we remember things more warmly and fondly than they actually were. Especially for someone who is as nostalgic as me. I remember the day I was diagnosed as cold, confusing, and humiliating. I don’t think that I was sad or angry yet. I had relatively mild symptoms at that point in my life. The words “no cure” and “no treatment” were scary, but they became a much grimmer reality as my disease progressed.

I didn’t talk about FSHD for many years after my diagnosis. My face felt hot and tears pooled up in my eyes any time I tried to say “FSHD.” I had begun dance classes at 3 years old. I dreamed of being a professional dancer. The end of dance, which came for me in 10th grade after being too weak to keep up with the class, took an enormous toll on my mental health. 12 years later, I still think about dance and how much I miss it, and what I would give up to have it back. I still choreograph routines in my head.

I failed out of my first year of college due largely in part to my depression, but also due to my pride and denial of my condition. I needed accommodations. I needed help. I asked for nothing.

I stayed in a toxic relationship for over a year because I had little self-worth and because sometimes the copious amounts of drugs and alcohol I had access to then distracted me from my pain and from reality. I hurt my family and I lost friends. I ended up in a psych ward twice for being suicidal and the second time hit me like a brick. I saw what I was doing to people that cared about me and what I was doing to myself.

Soon after I moved back in with my parents in 2014, my father asked me to write a chapter in his book he was writing on Muscular Dystrophy. I don’t know why, but I said yes. That yes was a turning point for me. It is still a process I’m working on, but I started to face FSHD in every way possible. It was, and is still, a grueling task to be honest with yourself and honest with others. It’s hard to be vulnerable. It’s hard to ask for help. It’s hard to pull yourself out of those moments of self-pity and despair. It is hard to constantly mourn for the loss of abilities, hobbies, dreams, mobility, relationships.
I also met my current boyfriend a few months after moving back in. At that point, I had given up on love. And that sounds so disgustingly cheesy, I hate that I even said it, but it’s true. I was done looking for someone to “save” me. That isn’t a healthy mentality to have, but I had it for too long. I was all for kicking life’s ass on my own. Apparently the universe thought “too bad” and sent me Adam anyway. And although the seed had already been planted in me to build a better life for myself, to grow, to find myself again, Adam became my sunlight.

I struggled to find employment for a while. I eventually landed a job at Starbucks. I continued writing papers on FSHD with my father. And after a year, I began working at a Center for Independent Living (CIL) while doing contract work as an Intake Specialist for the Protection and Advocacy (P&A) organisation I work at now. CILs are nonprofits across the United States that provide services for people with disabilities. P&As are federally mandated agencies that advance and defend the rights of people with disabilities. I like to describe us as a nonprofit law firm who does a myriad of other things too.

I fell in love. Not only was I serving other people with disabilities, I was working with coworkers who also had disabilities. I felt at home. For the first time in my life, my disability was an asset. Being honest about my FSHD, and my struggles, was appreciated and welcomed. I was fascinated with the work I did in intake. I knew little to nothing about the Americans with Disabilities Act or really anything disability related. And here were two organisations filled with people with disabilities and without who were passionate about advocating for themselves and for others. I started full time at the P&A by the end of the year, and shortly after, finally found what I wanted to do as a career. I plan on going to law school after I obtain my bachelors and work as a disability rights attorney. I believe that working here gave me the courage and inspiration to volunteer for the FSHD Society as the North Carolina Chapter Director

FSHD is the hardest challenge I’ve ever faced. It has brought me such large amounts of pain and sadness and exhaustion that I sometimes wonder how I’m even able to function. It has taken much from me and it will take more. It has taken much from my younger brother, who is also affected.
FSHD is a ruthless and cruel disease. It is also a gift. It doesn’t look like a gift. It isn’t wrapped very pretty. It’s heavy and awkwardly shaped. It is hard to open and easy to misplace. But if you chose to open it, and accept it for what it is, what a beautiful gift it could be to yourself and the people around you. FSHD gives us a unique perspective. It makes us stronger, kinder, and more empathetic. It gives us a different understanding of the world, and it forces us to think outside the box.

FSHD has taught me many things, and not all of the truths that it’s taught me have been easy to swallow. It’s taught me humility, patience, empathy, and courage. I learn more about myself every day. It’s taught me to accept change and to seek growth and knowledge. It’s taught me how to advocate for myself and for others, and how to be honest, how to apologise.. And most importantly, it’s taught me what love means. Unselfish love. That is such an enormous statement that it would take me forever to describe just what that means for me. But I am reminded of it every day when I come home to Adam and walk up the ramp that he built by hand for me in the middle of a North Carolina summer, when my coworkers eyes light up as they share what work they are doing in the disabled community, when strangers offer a helping hand, when my parents send me a text message just to say hi even if I haven’t been responsive, when our friends built their new porch with shallow steps so that it’s easier for me get into their house when we get together. Love is gratitude and kindness.

Until that day, I will keep laughing about the many awkward situations FSHD puts me in, I will keep enjoying my VIP parking privileges, and I will continue to wake up grateful for this beautiful and weird life that I have been given. 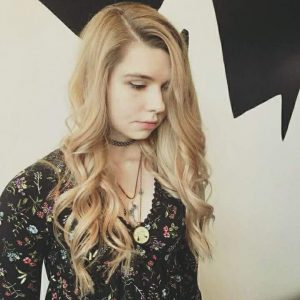