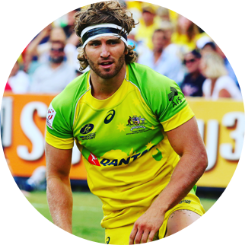 Lewis Holland started his journey with rugby Union as a 12 year old, when he was selected for the ACT Brumbies under12 representative side; this lead to his inclusion in what was then the Gold Cup Pathways Program. Training sessions of up to 4 times a week involved travelling from Braidwood, accruing upwards of 1000km per week in travel, no mean feat for a 14 year old and a benchmark for his determination and dedication that has continued throughout his career to date.

In 2010 Lewis was chosen in the Australian School Boys Representative side that toured the South Pacific and New Zealand, he then returned to Canberra to train with the Brumbies.

In February 2011 he attended the Darwin Hottest 7’s as a member of the Brumbies and caught the eye, of the then coach of the Australian 7’s Men’s side Michael O’Conner, he was elevated into the squad, and week later found himself debuting in Wellington NZ as the youngest player.

In September that year Lewis was bestowed one of the highest honors in sport when he was chosen to carry the flag for Australia at the opening ceremony of the Youth Commonwealth Games held in the Isle of Mann. Lewis captained the rugby 7’s side which secured a bronze medal.

2012 saw Lewis’ inclusion in the Australia Under 20’s rugby side which competed in South Africa, which along with his Australian Men’s 7’s rugby representation he was awarded the Graham Gordon Memorial Trophy for the ACT Under 20’s Player of the Year.

2013 highlight of the year was the 7’s Rugby World Cup, which was held in Moscow.

Lewis missed out on selection for the 2014 Glasgow Commonwealth Games and most of the season due to injury, but made a successful return in 2015 to help win the Oceania Championships, which secured a spot for the men’s side in the 2016 Rio Olympics.

Lewis had an explosive tournament in February of 2016 in the first ever Sydney leg of the World Series Competition, it saw him return to his pre injury form and play some of his best rugby ever.

In August 2016 Lewis added Australian Olympian to his badges of honor.

In a cruel twist of fate, in pre season training he suffered a complete rupture of his Achilles tendon, a season ending injury and a 12-month rehabilitation program.

Lewis will now apply himself off the field, which was made official by the ARU, when they announced that he would be Club Captain for the 2016/2017 seasons.

Lewis will use this time to mentor the new and younger members of the squad with his vast knowledge and 7 years of international representation, whilst he rebuilds personally to return in time for the 2017 Commonwealth Games.

A true feminist, a mother and step mother to four children and grandmother, Kerry-Anne is passionate about helping those in need and making a difference.