Turning my weakness into strength.

I never, ever would have imagined that our family would have to face the horror of Muscular Dystrophy. I grew up in Toowoomba, with my mother, father and brother. Over the past 3 years, my brother, mother, and myself have been diagnosed with Fascioscapulohumeral Muscular Dystrophy Type 1.

My brother and I were both active children. My brother played sport, and I was a dancer. I dreamed of being a professional ballerina. But I struggled with my posture, and also my lower limbs during growth periods. I remember my mother being on the phone to my ballet teacher, and my teacher saying I would never have a professional career. This was heartbreaking for me to hear. I had no explanation for why I would not hold my shoulders back, or why I could no longer do a grande plié. I was taken to several specialists, but no one ever came to a diagnosis.

I remember avoiding sports carnivals at school, as at times I was laughed at. I vividly remember trying shot-put and having no strength whatsoever. As I entered my teenage years, I became very self-conscious about my body, and internalised my feelings. I was bullied and teased, I was even teased for having good skin, which I now know is a characteristic of FSHD.

I had eating disorder tendencies from around age 9. A combination of environmental, genetic, and social factors lead to me being diagnosed with anorexia nervosa at age 15. I struggled immensely, never receiving proper help. I regained weight just to keep everyone off my back. But I felt fat, and thought I looked fat. With no psychological help, this developed into a cycle of relapsing several times, some very severely to the point of being life-threatening; my behaviours and patterns had become very ingrained, as they had not been challenged.

2016 was when it became apparent that my brother was unwell. I was so, so worried as he too suffered from mental health problems; I actually feared for his life, as he was unable to work, and lost his sense of purpose and ability to support his family financially. I was not coping, and started to relapse; it was my trusty coping mechanism. But this time was different. My body could no longer deal with the stress I had placed upon it for over 10 years, and my organs began to shut down. This was the hardest period of my life.

I was hospitalised for 4 months at the start of 2017. I was on an eating disorder program in a private clinic in Brisbane. I was removed from my family, and was able to focus on learning to eat again. I was so unwell, and had a lot of weight to gain, and required nasogastric refeeding and constant monitoring as my body was so unstable. I also for the first time had psychological support. That admission saved and changed my life. Whilst I have had relapses and admissions since, each time I have become more aware, and stronger. I have not been in hospital since the start of this year.

During this time my brother was still undergoing the diagnostic process. At this point they had a strong suspicion it was FSHD, as my mother had attended one of my brothers appointments; they clinically diagnosed her on the spot. His journey of getting diagnosed was frustrating; blood testing is extremely difficult, and he had to have it redone 2-3 times.
It seemed like ages, but finally, we got a result.

My brother had FSHD Type 1. My mother was then tested, followed by myself. I was lucky and only had to have the test done once. My mother tested positive as suspected, and I was also diagnosed at the beginning of this year. My diagnostic process involved seeing a geneticist, who explained the genetic disease pattern. I had a 50% chance of having the condition. I was aware that I would be advised about fertility options, and was told that if I wanted children I needed to consider freezing my eggs as soon as possible due to my history of anorexia, being over 30, and also the probability of me having FSHD. This was quite confronting, as I had not really considered whether I wanted children or not.

It was almost 6 months before I received my result. I remember the day vividly. Our genetic counsellors number came up on my phone. I knew she was calling because she had a result. I answered. She was very kind, and made sure I was not busy and had someone with me. I put my phone on speaker, and sat down at the kitchen table; my mother with me. ‘Ellen, you do have FSHD 1’.
Cue my mother bursting into tears. Ingrid (the GC) started to talk more but I honestly was still back at ‘you have FSHD’, and don’t remember what else she said, as I too started to sob, and struggled to talk.

Between the blood test and diagnosis, I made the decision that if I tested positive, I would not have children of my own. I think that as a young woman this has been one of the hardest things to deal with, as people always wonder or ask why, and I see people my age starting families and know that will never happen for me.

My reasons are complex, and involve my history of anorexia and the impact childbearing would have on my body having FSHD and suspected Ehlers Danlos Syndrome.
I am the least affected out of my family; I believe that my current career and previous history of exercise and movement have helped me to strengthen the supporting musculature. I don’t have any limitations in my daily life, except for fatigue, and sometimes lack of strength.

I work as a Fitness Instructor, my primary area being Pilates. My passion and drive for my career has never been stronger, and I think being diagnosed with FSHD has propelled this. I want to be a positive, healthy role-model for young girls and women, both when it comes to body image, but also for those suffering from disease. Sure, there are certain movements I cannot do, but let my sense of humour do the talking and joke ‘oh wait, I’m missing that muscle’, or use my hyper mobility as a party trick!

My family inspire me; watching younger brother deteriorate has been hard. He is such an amazing father to his children, and his wife has been such an amazing support for him. My mother, she is my best friend. She has been through so much, and I think all of us having the disease has brought us closer. I can openly talk to my mum or brother about the disease and mental health, and we often joke about it. If you didn’t laugh, you would cry.

I am lucky to have a professional support team involving my General Practitioner, and Psychiatrist. And when required, my Dietitian, and access to Psychological support. They also refer me to other specialists, such as Rheumatologists as required.
Being diagnosed with FSHD has helped my recovery from anorexia, and has really helped me to develop an appreciation for what I can do NOW. I no longer wait to follow my aspirations, dreams and goals, I have since made choices to work toward them, and I am actively doing this, and have ticked off a number of goals since diagnosis. I continue to turn what
is perceived as a weakness, into my greatest strength.

I don’t know how quickly the disease will progress, or if it will progress; but no one really knows what the future holds! So why wait?
I have a desire to share my story for FSHD awareness, to inspire those with and without the disease, and to be a living example that even though life can be really, really tough, it can also be so, so amazing. 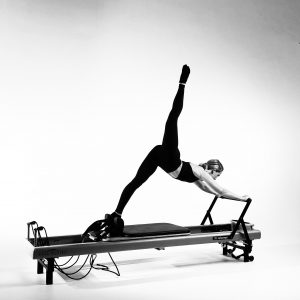