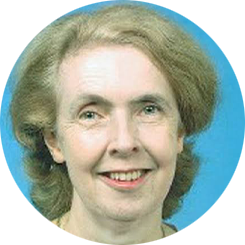 As a neurologist and scientist Dr Fitzsimons’ special areas of interest include the clinical and scientific aspects of muscle disease, in particular of muscular dystrophy, in which areas she has published extensively. She has also held positions in numerous leading medical institutes, including the Laboratory of Molecular Biology at Cambridge, the Royal Postgraduate Medical School, London and the National Hospital for Neurology, London.

In her role as a journalist Dr Fitzsimons has contributed to numerous publications including The Times (London), the South China Morning Post, The Canberra Times and the International Herald Tribune. Her writing covers a diversity of topics, from university autonomy to the ‘rule of law’ in Hong Kong. But whatever the subject may be, Robin’s readers may be assured that the rendering will be well researched and executed with passion.

Passion is also evident in Dr Fitzsimons’ engagement with the University of Sydney, which has continued since her days as an undergraduate where she was both a member of the Students Representative Council and President of the University of Sydney Women’s Union. As an alumnus she then went on to become a member of a number of local and overseas alumni organisations, including the Medical Alumni Association, the Alumni Council and the UK Alumni Committee. She has also been a regular attendee at University-related events overseas, engaging and networking in the University’s interests whenever the opportunity presented itself. It was in these roles that she earned a formidable reputation as a staunch and vocal advocate for the role of alumni not only in supporting the University but in shaping its future.

In 1997 Robin was elected a Fellow of Senate – the University’s governing body, by the University’s graduates. She went on to be re-elected on two further occasions to serve for a total of twelve years. In that role she served on a record number of eight Senate committees as well as being Senate’s representative on the Council of Women’s College.

Though no longer a Fellow of Senate, Dr Fitzsimons retains a deep interest in the University, its continued wellbeing, its graduates and its governance. These are all matters about which she feels deeply and holds strong views.

One of Robin’s long time associates from her SRC days, former Justice Michael Kirby, has described her in these terms:

“Robin Fitzsimons is the quintessential Sydney University graduate. Like me, she is the product of the marvelous opportunities provided by the Student Unions which prepare graduates for a lifetime of public service. Her talents were refined in decades of causing trouble, but always with perfect manners and a charming smile. She challenged those who ever forgot the high university commitment to intellectual excellence and rigour, fair dealing, participation and equality. I am sure this high award will encourage her to go on making trouble in the same equable way.”