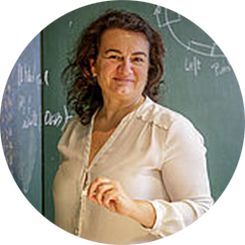 About: F. Magdinier obtained her PhD in Human Genetics from the Lyon 1 university on the implication of DNA methylation in the transcriptional regulation of the Breast Cancer gene, BRCA1. She then pursued her scientific career as a post-doctoral fellow at the National Institute of Health in the US, first in the laboratory of Alan P. Wolffe and then with Gary Felsenfeld where she developed her skills in the field of epigenetics and chromatin regulation. She was recruited as a Research Associate at INSERM in the team led by Prof. Eric Gilson at ENS Lyon in 2003. She became research director (DR2 INSERM in 2009) and joined the Laboratory of Medical Genetics and Functional Genomics in 2010 as team leader. Her work mainly focuses on the exploration of epigenetic modifications in rare genetic diseases by investigating different aspects of epigenetic regulations (DNA methylation, histone modification, nuclear topology) and access to vast collections of biological resources.