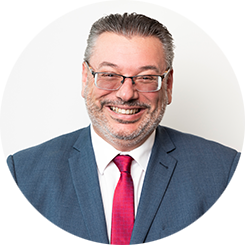 Danny’s involvement in the finance industry commenced in 1987, working for the Westpac Bank. In his first 10 years he took out many awards including, ‘The General Managers Excellence Award’​ in 1995. In 1997, Danny purchased his first Mortgage Choice business and was awarded ‘Franchise of the Year’​. Over the next ten years, Danny’s business rapidly expanded adding several additional Mortgage Choice franchises across Sydney. This led to Danny being named ‘Business Person of the Year in 2003’​, from his peers within the South West Region.

In 2005, Danny was again awarded ‘Franchise of the Year NSW/ACT’ at the Franchise Council Awards. Danny then made the decision to sell his Mortgage Choice business and begin another venture within the industry. Danny founded and operated his own boutique business in South Western Sydney for the following 5 years, with many people knowing Danny from his days in Liverpool.

Danny is highly regarded within the industry and having a broad scope of clients, including commercial and industrial property investors, developers and builders to first home buyers. Danny’s wealth of experience and professional approach assists customers to find ways to achieve their financial goals and insurance needs. Danny has completed his Diploma in Finance and Mortgage Broking and Diploma in Financial Planning and is a Associate Member of the Mortgage & Finance Association of Australia (MFAA).