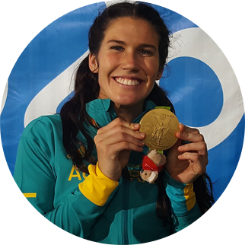 Charlotte Caslick is a dual international, representing Australia in touch football before being drafted into the successful Australian Rugby 7s team. In 2013 as an 18 year-old she played in her first Rugby 7s World Cup in Moscow and her performances during that tournament established her reputation as the team’s leading play-maker.

Standout performances during the 2013/14 World Series saw her nominated as World Rugby 7s Player of the Year. Underlining her consistency she won a further nomination for that award in the 2014/15 season and was named in the first ever World Rugby 7s Dream Team.

Charlotte continues to enhance her reputation as one of the world’s leading players, collecting the World Series title in the 2015/16 season , winning the MVP award in Sao Paulo & Player of the Final in Atlanta along with being named in the World Rugby 7s Dream Team for a second time. The highlight for Charlotte in 2016 was being an integral part of the Australian 7s team to win GOLD at the Rio Olympics.

The Australian Women’s 7s team is currently ranked No. 1 in the world.

‘I grew up in Brisbane and always had very supportive family and friends. My two older brothers both played rugby and obviously had a big influence on my sporting choices. I attended Brisbane State High, which has a rich rugby heritage, and shortly after graduating, moved to Sydney to join the Australian Rugby 7s program full time. I now live with my partner who is a member of the Australian men’s 7s team and 2 other girls from my squad.’

Charlotte made her mark on the rugby 7s world in more ways than one. A self-confessed girly-girl, she was quickly identified as the girl with pig-tails and bowed ribbons in her hair. In the world’s fastest growing female participation sport, a generation of rugby 7s starlets have followed her lead.

‘In my spare time I love to get dressed up – I love fashion, make up and going out. We live near the beach, so I also spend a fair bit of time down there.’

‘It’s amazing that I get to travel the world doing something I love!’